When Markus’ family and company left Bridge Street Café, we were going back to Amherst to drop off his sister, Sarah to her cute house out on the marsh. It smelt like Christmas, which was amazing, and then we were off to Halifax. During the drive, Markus and I clearly were tired and hung-over, to the point that we didn’t last five minutes in the car without falling asleep.

When I woke up we were in Dartmouth, having passed the entire province without me noticing (awesome), and we had to get some food for the engagement I was going to in the evening with Markus, and for the dinner. I found that my dear friend is in fact a celebrity in the East coast, as just about everyone knows who he is and thus we must stop to talk to everyone. Slightly awkward, but I just pretended to not speak English and keep quiet in the background; I didn’t expect to be introduced anyways! I can’t imagine how much more awkward that would have been.

We arrived into Lake Echo, where he lives, and we shoveled the walkway since a storm had arrived when we were coming through. Greg and Joanne were shocked that I wasn’t cold in shoveling the driveway without a scarf or mittens, I guess we become immune at some point. We went in for some hot cocoa and then the tour de maison as Markus stated. Their beautifully decorated house has an amazing view of Lake Echo (how ironic), and just so much character. We made dinner and floated over to Markus’ friend’s house.

The original engagement was cancelled since Stacey got sick at the last minute, but it was okay. We were there, and we heard stories of wild Australia, and random East-Coast adventures. I probably drank too much, and thus my tounge was a little loose, but it was all in good fun as apparently I’m a riot! 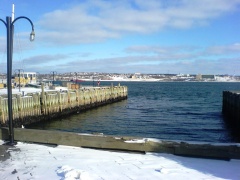 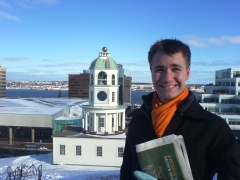 We headed back and “hung” around for some long hours talking, before I fell asleep on the most comfortable pull-out bed ever. It was just perfect, minus one thing. I got a little upset during the evening, but it was all fine when I woke up and we were headed into Halifax. We did some errands on the way in Dartmouth, and then we got dropped off at the harbour of Halifax.

We walked around through the mall, got some mango shakes, checked out the people (aka people watching) and continued on our travels up to the Citadel and Historic district. The tour was amazing, and quick! The usage of complicated phrase structures and obscure words were making me hot, so we thought that it was better to go back to the meeting spot to avoid anything else more scandelous!

We made it back to meet Joanne and then proceeded to Halifax International Airport where we had a coffee and I got onto my flight, in the most unrushed flight process ever. I could have gone through security at five minutes before departure and it still would have been good. Tears were shed, and Christmas Joy was spread all around, and I was off to Montréal to make my connecting flight to Toronto…

Christmas is in a few days and I’ve yet to think of it, since I didn’t plan on coming home this year!