Why can’t we all just get along I say? I swear today is the theme of weirdness and I’m going to write about it all. First of all I did a tour for some students that are from St. Andrew’s College. Saying that they were jocks would be an understatement, but it was weird. They were jumping off each other, giving each other piggy backs, hugging, so much affection that I became confused. Was it just me or did my wires get crossed during this? Anyways, it was a good way to get paid, and I got double time, so I’m happy.

Second thing that happend, I went to mealhall for a dinner date with Rania, and this guy sitting behind us made a huge scene because, well we don’t know why! He went to go sit down, and apparently because he’s too “cool” or whatever, he had to throw the chairs at least one metre away from him in order to have enough space to continue to sit down and eat with his mate across from him. What’s up with that? 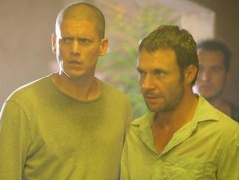 Thirdly, the autumn finale of Prison Break was on, and I nearly cried it was so intense. My thoughts on it? Well I’ve always wanted Whistler and Michael to become BFF (Best Friends Forever), because I feel chemistry between them, totally platonically of course; or something

) But despite the fact that they are working for different organisations and they nearly killed each other, they should be BFFs and it’s making me sick that they are now against each other. Can’t we all just get along and trust each other? Honesty is always the best policy, even if you are about to be raped in a jail in Panama named Sauna.

So much more can be said about that show; but alas, my point is that trust is over-rated and the show proves it. Whatever they show on TV has to be true, right?!