And so the afternoon after I came home from Prague, I was all packed and ready to make my way to Stockholm. The night before I had met with my conversation partner regarding my CAF rebate which would put 600€ into my pocket; we both agreeded that I’d go pick up my paperwork from the Préfecture the next morning and go over the the CAF together to get it done; since time was pending. I went to the Préfecture and the bitch woman refused to give me my paperwork for various reasons, one of which becasue I was leaving in two weeks and she didn’t see a reason for it. She also requested a paper to pay for some tax, which was sent to Canada and therefore I never had. She showed me the stuff and ripped it out of my hand and I left nearly in tears. I called Birahim and told him to not bother, and that I was sick of the fucking country that had treated me like shit since I arrived. 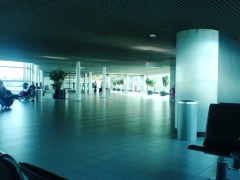 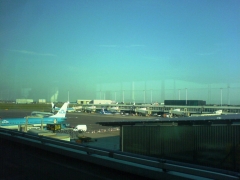 So I went to the airbus stop, and well it didn’t show up for 40 minutes so I was nervous, but it eventually arrived and I got to the tiny Strasbourg airport. I grabbed some food and a book to read for the trip, and checked in my luggage to go via Air France Régional to Amsterdam and on to Stockholm via KLM. All went well and we boarded the tiny little plane and made our way to Amsterdam which was a really nice, modern and huge quite frankly. It was just about every plane was KLM there, blue and white everywhere, so I hung out in terminal F or something, and my plane was leaving from C so it took about 25 minutes to walk from each. I had a sandwhich and then headed to my boarding gate with 30 minutes to spare. It was perfect when I arrived at the gate, no line up and they were just about to start the last call so I just strolled on without having to wait or anything. I sat down and we were in Stockholm after a quick nap and I was happy camper.

My bag was the first to come off the conveyer belt, even though it was already going around since we got off the plane (love the Schengen region), so I ran to get it, ran to the closest SEB conversion place and asked if I could change some Euros into SEK. The woman was about to close as it was past midnight, but I managed to get in to her dismay; then ran over to the woman to get my bus ticket for the lovely Flygbussar. I tried to get a student discount, after brushing up my Swedish, but she wouldn’t accept for me any but the listed student cards. I was not impressed as there was 100:- gone right there; boo! I went outside, and it was freezing cold as I was not prepared at all and was in sandals and shorts. I threw on a jumper and waited with the other Swedish people as they made fun of this emo guy that was practically naked. It was mean, but I had nothing better to do.

Bus dropped me off at CityTerminalen, but all the doors were locked and I had to get into T-Centralen before the last subways left; so I ran all around the block to the only open entrance to meet Tony; my host for the week. To be fair, he’s nice, but he was soo weird when I walked up to him. He’s like all shy and “Jag är jättenervös” and I’m like asking why but he’s just being antisocial. So we run to the Tunnelbanna entrane and I buy some tickets quickly and we get on the direction of Bergshammra, where he lives which is apparently in Solna, and is a huge student population. We got there after some small chat, and eventually I went to bed because I was so tired. Next days were walking around and seeing the nice weather in Stockholm. Tony had told me that it would rain the whole week so I was a bit skeptical, but it turns out that he’s just a worry ward and negative about everything.

The weather was amazing you have no idea; I just wanted to melt right there with the perfect breeze. We layed in some parks and then went shopping for some food. What student hasn’t heard of pasta with cheese sause? Apparently Asian ones, because when I proposed some pasta he just about said “What?” I was surprised, it being the cheapest and easiest thing possible. Back to the house we went and cooked the food, Swedish the whole time as I didn’t want the foreign asian students to understand what we were talking about. I found this awesome schlagger radio-station “Svenska Favoriter” which made me cry with all the amazing songs that I clearly knew. Dinner was good, and we cleaned up and went back to watch some films; it was great. 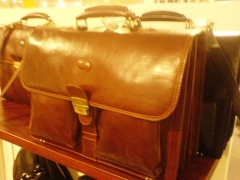 We decided to hit the shops the next day, which means Åhléns right downtown to get Tony some sunglasses. As it turns out, he looks horrible in all glasses and I couldn’t find a nice way of putting it. It’s basically because he’s asian and his eyes are too far up and he has no nose; so we gave up. Plus he’s really cheap and couldn’t find anything in his price range, I scoffed and moved on. I also found something that I’d been looking for quite some time now. It’s an old type of briefcase that I’d like, similar to the one above, but with a strap. It’s very British old-school I know but I want one damnit! Walking around again was nice as I paid a trip to the bank cash point and we went for some ice cream in gamla stan which was so tasty! We saw a bunch of funny things over at the Nobel Museum, outside there are a bunch of a cafés, one of which is a gay one, and then tons of tourists around. Now between all the foreign tourists not being aware that some things are gay, and the homosexual’s running around (they were clearly camp), it was like a circus. It made me laugh and we were on our way to go watch a film for the next morning I’d be meeting a friend of whom I longed to meet one day.

Who is this person I speak of? It’s Tobias, my Eurovision confidant who lives in Finland was coming home to Sweden to visit his family for Midsommar. So for the morning we went for coffee and a bit of a semi-lunch thing and sat and talked for awhile. It was nice to finally have met him, having spoken for so long and such. He is great company, as expected and frankly is just a wealth of information! We went to an old record store to seach for vinyls for him, and I found some old Swedish hits that made me happy; but then I bought a couple DVDs, a few that I’d been longing for or really wanted. Since I’m a loser I’ll admit what they are: Fucking Åmål, great film, and För Evigt one of my all time favourites. It was all under 150:- so I was so pleased and strolled out back to the bus station to drop Tobias off to his bus. Golly there were a lot of people and some damn good looking ones too that caught our eyes!

I headed back to Solna where I found Tony hadn’t eaten all day and had been playing video games. He reminded me of someone, antisocial and like a hermit really. We had a long talk about how he was afraid of like everything, it made me laugh as he worries about anything that anyone could ever worry about. Maybe because he’s asian, I dunno? We watched a film and I binged on popcorn for the next day was Midsommafton so most things were closed and we’d be off to Uppsala where Arash invited us to a friend of his’ party.

The day was rainy and we went for a walk. Tony got scared by the birds and made a scene whilst I tried to pretend that I didn’t know him. We went to get some food and then to NK to look at things we obviously couldn’t buy. We realised whilst in the bathroom that we were going to be late for the train, and we ran to the train station. Seeing Tony run made the entire vacation worth it as it was like
someone who’d never walked before. I couldn’t believe how unco-ordinated the guy is, and even whilst sitting on the train he was still out of breath. I couldn’t help but laugh at him and take a little rest whilst reading, sinfully, Aftonbladet.