So the day in the dump of the hostel was okay as I shared a room with a layed back Australian guy and two guys from Singapore who were really nice. I talked with them for quite a long time before going to dinner myself, as they were interested in where I was from and where I had been. One of the guys was 27 and you never would have thought, except for if he told you his profession; he was a stockbroker who was working in Shanghai. Apart from that I would have thought they were teenagers, but in any case they were good company for the evening, especially after the KFC run as they had nothing better to eat.

I went out to search for a nice resteraunt to eat at myself, since I was in Nice for the night. I found this nice strip of resteraunts and an English-French cuisine resteraunt. They seated me on the patio right next to the cars that were racing down the street and they were pleased to have me. I never realised how difficult and awkward it is for someone to eat at a resteraunt alone. Everyone was staring at me and giving me weird looks but I just played with my bread to pass the time, and screw everyone else; if i need to eat them I’m going to eat where I want damnit! I was moved to another table halfway through dinner because this group of annoying Dutch women decided to take over the entire terrace; so I was moved to the other side with my grilled chicken platter. It was fenominal I must say and the service was really nice; so I was sure that I was going to leave a tip for the first time since September.

When I was going onto desert and about to pay, they brought me a shot of Cognac, which was a surprise and then the bill but there was a disturbance down the road and it turned out that some Arab guy was hit by a car and was laying unconscious as many people crowded around. He was unconscious and tons of ambulances and such came around to get him, and I left after paying my 26€ meal. It was damned good though, I must have to say so I was fine with paying that hugely large amount of money.

Back to the hostel and straight into bed since I was knackered and still recovering from my departure with Markus. I was rudely awoken in the morning, but pleasantly surprised when it was an SMS from Markus’ Skype wishing me well in my travels back and how much he enjoyed the time that we had in Italy. It made me smile and made the leaving Nice a little bit better. 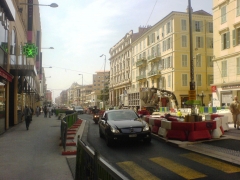 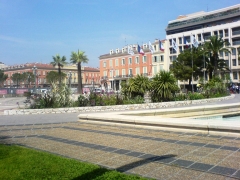 I left the hostel and went towards the bus station to sit around for a few hours, and the streets of Nice were chaos. The entire city is under construction and it’s aboslutely horrible as you can see in the photos. The park by the bus station was a nice place to sit and take a nap in the afternoon before going to the airport; so I sat there and people walked by mostly couples with their children but it was nice. Some Americans came to ask me for directions but I couldn’t help but; unfortunately. 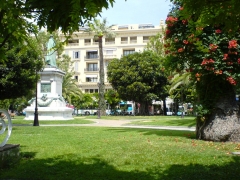 As I was leaving I caught my eye in a tree near a statue and it nearly made me cry. I saw the most amazing flower that I’d ever seen in my entire life and so I was determined to take it. I picked one and put it into a book for safe keeping, and I wore the other one in my ear as hommage ot my trip in Italy with Markus. It even survived the way back to Strasbourg which I was surprised about. 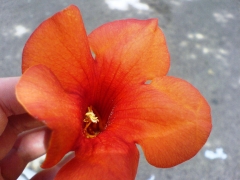 I made it to the airport with all the Norwegian tourists, and got on my flight to Strasbourg and in no time flat I was back at my flat unpacking and at the same time packing for my trip the next day to Prague. It was all so rushed, not helped by the fact that I was delayed by the bus, but I eventually made it and went out for a few drinks and to say goodbye to some people before I embarked on my next adventure.