So we left from Gare de Lyon in a huge rush because well we had problems getting up and public transportation. Despite all of this, we made it on time, but it turns out that we nearly missed the train because as we were boarding the TGV train with a destination of Geneva. It was a nice train, and after finding spots for our luggage we sat down and made our way to Geneva. It was a quick journey only about 5 hours at a lovely speed of 250km/h going through the green pastures of the Jura. I think it rained at some point but I’m really not sure, but the tiny little train stations that we passed were an amazing feat for me, to realise that even in these run downed ones they still have TGV trains!

The weather in Geneva was quite nice, windy but along Lac Léman it was just gorgeous. I had to comment about the large amount of immirgants that there are in Geneva. I later learned from a local that the city and basically the country is all immigrants, and they open their doors to many people; but don’t allow naturalisation. In any case there are lots of people speaking French with weird accents that aren’t francophone at all. It was fun in any case to be able to communicate with them; but golly gee willigars are things in Switzerland expensive! It’s horrible, I want to hurl everytime I go to buy something! 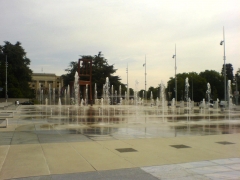 So what is there to do in Geneva? Well it’s the origin of a lot of international organisations and incidentaly the UN, so a trip to see the UN offices was something that was absolutely… manditory. When one walks up to the UN offices in Geneva they notice that there is a huge ground fountain area that has a unique show going on with lights and fountains of different hights and sizes. In the distance over near the entrance there is this massive chair, that truely is the largest chair I’ve ever seen in my entire life. It has a missing leg that is to symbolise the ongoing and unfortunate existance of landmines, and demonstrates a simulation of a limb being removed forcefully from a body. Truely is something that I can relate to, having been the MC at A Night of a Thousand Dinners two times during my high school career. For those of whom don’t know what that is, it’s a fundraiser around the world where people gather for dinner to donate money to eradicate the usage of landmines worldwide, something that the United States refuses to do, as they are continuously the largest producer, distributer, and user of the dangerous weapons.

When we arrived I wanted to take a tour and see the insides, but we had a bit of problems finding the enterance until we walked around and went to where there looked to be a mass amount of foreign looking people. I went in and got the supercool visitors badge, which made me feel so official, and we had to wait an hour for our tour. We took it in English for obvious reasons, if not so obvious because my mom doesn’t speak a word of French unfortunately. I figured that since we had a pass we could walk around the grounds, but the security guards would have nothing to do with that so they chased me down pretty quickly and directed me to the waiting room for the tours. We sat there boringly and waited to take the next tour in English, and then finally we started. We had a really nice tour guide who was French, and she struggled at times with English but it was a very informative tour. She showed us all the rooms that were important, and lucky for us there was a conference being held there so the rooms were in use. 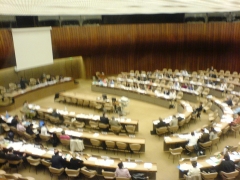 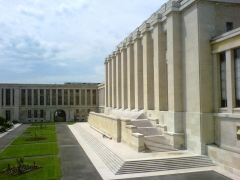 The lovely thing about the building is that it’s divided into several different wings. The new one and the old one, which are all connected by the famous hallway that was even around during the times of the League of Nations, that means pre-1920’s for all those who are not familiar with the history of the United Nations. The other interesting thing about the office in Geneva is that it’s where all the member-states gifts to the UN are. Just about every country member has given at some point the UN a gift that reflects culture in some way or another; the most prolific one was the USSR’s monument in the outside area. I have attached some pictures of other gifts below. The one on the left is a painting of a conference between Sweden and Finland when they were desputing the territories of Åland Islands off the coast of Finland, apparently the painting was a reflection of the peace finally achieved on the subject. 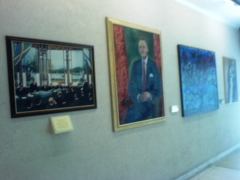 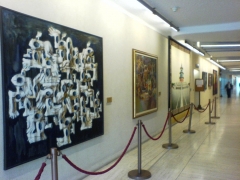 After the one hour tour we went to the gift shop and bought some souveneers. It’s a true shame that the main UN office is in New York, but I will have to go one day to see those offices which are much larger and even more international than this one. I bought a flag that had some emblems on it, and mom bought this square box thing that shows different aspects of the UN Offices in Geneva. After this we embarked on the walk back to our hostel. Before we had even gotten to the UN we had quite the fiasco of looking for a bank, and one of the rudest woman gave me directions, but we found a machine that we could use so it was all good. 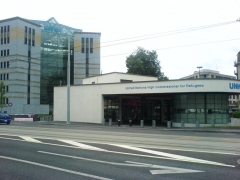 Along the way we came across some of the most beautiful green pastures that I’ve ever seen it was amazing to see. But what else could it be like in Switzerland, one of the most beautiful countries I’ve ever been to; the only thing that they have going bad for them is the high cost on everything. We also passed along the tram tracks the UN High Commission for Refugees which was this huge building, and I didn’t notice until we were leaving but all the buildings around the UN and even in that whole quartier were devoted offices to different departments of the United Nations; quite neat.

Although out stay in Geneva was a couple days, it certainly felt like a lot shorter time since we were actually doing some formal things whilst there, eating out (or at least trying to find places to eat out at), and doing a tour then looking around for shopping mall which never existed. On the final night I was sitting in the lobby talking on my mobile to Robb when some Swiss guy named Guy sat next to me and started talking. Apparently he just likes to meet foreign people and learn t
hings about the world and whatever; he was a nice guy but very weird. In any case I just went for a walk in the rain and then came back quite late to bed, ready to wake up in the morning to get out of the hostel and move onto Montreux, our next stop in Switzerland.