Hello world. Yes it’s me, and yes I’m alive and kicking. What a wonderful last few days it’s been! Traveling the world, and spending some awesome times with some friends! Who could have possibly thought that it was so cool? Well besides me, but that’s a minor detail!

Check out this awesome map which shows where I’ve been so far. I will make a list for you and then explain it all.
Strasbourg -> Paris -> Nyköping -> Stockholm -> Arlanda -> Luleå -> Kalix -> Haparanda

Day 1
So I left for Paris at 03.30 and got to the train station without being raped, attacked, or followed. I thought that I lost something on the way, but after paranoidly searching everywhere on the ground I gave up later to find it in my pocket. Blame lack of sleep and nervousity. I got there and it was completely empty, but after walking to the wrong enterance I found my train and was set ready to go to Paris. I sat there, and I was the only person in the train, I’m not joking! I tried to fall asleep but I couldn’t since well things were very uncomfortable. When we got to Nancy, this crazy cenile woman tried to steal my seat and then realized that she was mistaken after waking me up and making me move. The only word that I can think of is ‘wench’ but it turned out she was really nice after wishing me a Merry Christmas and safe travels, despite not taking another word to each other.

I got to the central station in Paris and walked around trying to find the Metro, it was intensly large and lots of foreign people who didn’t speak French. I got to the Metro stop, and since I already had a ticket I just used it and then went on my way hopping on the right train *I hoped* Turned out I did everything right, and it’s true about the metro being so quiet with nobody talking. Everyone in Paris looks tired, which was good for me cause it made me better looking than I do.

I got to my stop and did the transfers and the metro is actually nicer than I expected. People mind their own business, but I was tempted to say “do you want a picture or something?” they just stare like crazy, it’s creepy! I got to my stop and looked around for about an hour for the damned bus stop. After walking around the quartier about 4 times, I almost got hit by a few cars, and such I followed the trail of Swedish girls that were chatting away near a band of cars.

So I got on the bus and went to Beauvais which is like an hour away, and then did my baggage stuff and went and got checked. They didn’t check my passport a single time, which I thought was hillarious! I loved it though, no complaints for me! The plane was horrible, the seats were comfortable, but I was sitting with 4 babies around me with families so I couldn’t sleep a single moment and it was so annoying. It makes me not want to have kids despite loving them. The above picture is the sight upon arriving in Nyköping from my flight, notice the smallness of the airport and the amount of Swedish people who surprisingly speak French! 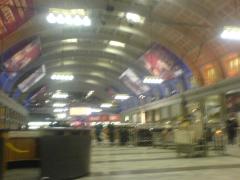 This photo is from Central-Statation in Stockholm after taking the bus to the bus terminal. I got bored for waiting hours and hours and hours and hours and hours, still going, until I explored down a street that looked cool. All the Christmas decroation were nice but I didn’t want to get lost and such so I stayed along the main roads. I made a call to a friend and he said he was coming to Stockholm to go out with some friends so he came on a train from Uppsala. It turned out to be fun since we hung out in the train station for a little while and then his friends came to pick him up. They invited me out and such, which was very nice to do, but unfortunately I was very tired, I didn’t have much Swedish money, and I had my luggage with me. Despite being quite safe in the bus/train terminal, it closes very early in the evening so I had to decide what to do. Several drunks were thrown out, which was funny, and I grabbed a cinnimon bun which was amazing!

So for the next few hours I walked around the downtown core of Stockholm. Only up and down one or two streets a few times so that I wouldn’t get lost. It’s difficult at night since it’s dark and the streets are sorta empty! I walked down the main shop street and saw a church so the above picture best describes that. There were even some people around that were speaking English, which I thought was really weird! The Swedish in Stockholm is much different than I realized, as I haven’t heard the accent before. They talk fast and use lots of expressions that I didn’t understand, but since I didn’t really talk to anyone, and I blended in, it was totally fine.

So since I didn’t want to be a homeless person in Stockholm, a foreign city, I decided to take the express train (seen above) to the national airport in Arlanda. It travels at 300km/hr and took about 20 minutes to get to the airport. This annoyed me since I was trying to kill time, not gain it. I was the only one on the train (surprise surprise) but it was very nice, and comfy. Notice the classic Swedish colours, and cleanliness which best describes the country!

I non-chalontly walked around the dead terminal for some hours, since it’s not very large, and parked myself down at the internet café which was very nice and cheap! Then I decided that I needed sleep, bad! So I found a spot where lots of people were sleeping, and parked myself down to try to find a comfy seat or something. This was not possible as airports are not built for sleeping, but I managed to get a few minutes of sleep I think. Between the Finnish and foreign travelers in the terminal, and the constant vaccuum cleaner working, I was able to get a nice seat on a bench below a huge Christmas wreath as seen above. This was a wonderful view since I couldn’t sleep and had nothing else to do, no jokes! So I killed about 10 hours at this same spot, and the guy next to me kept staring at me when I woke up. I don’t think he slept, but still it reminded me of creepy France and all their people staring.

I later realized that my choice of location was very poor. I parked myself down right infront of the train enterance (seen above). This means at 5am tons of people would be coming in and out, and I realized this when some woman accidentally dropped her paper on me. As if she couldn’t see me! Usch! Anyways, went and killed some more hours looking in the shops and such, until I finally could go check in. Oddly in Arlanda, for the domestic flights there are no check in counters, this confused me. It’s all done electronically, so I had to ask a woman for help and she laughed at me since I had never heard of the electronic things. I had no baggage to check, and just had to wait. All went fine and I got my boarding pass. I lined up to security check and they went through my stuff, not oppening my passport, getting my pass, or even opening my bags, how funny. In the name of national security, oh dear, but everyone loves Sweden so it’s okay! I sat down at some random flight going to Skullefteå so that I could hear some funny accents, and then I took a short nap. Suddendly when we began boarding I heard an announcement, and when it was said in Swedish I got nervous. I got the general gist of it: we overbooked, if you want to get a rebate and such come talk to desk blah blah blah. As a paniced, nearly illegial traveller, I ran to the front of the line and made sure that I got a seat on the plane! Good choice! They still never checked my passport, and just scanned my ticket, how funny. I was very clearly the only foreigner on the plane!

I got to sit next to two nice teenagers who were reading and joking the whole way. SAS Airlines is the absolute best way to travel, hands down. It’s expensive, but they treated me like royalty. Breakfast, papers, tabloids, pillows everything for only a 1hour flight! Talk about service, I was impressed! So we arrived in Luleå an hour later and I waited for Robert to come get me. He had sent me a SMS to tell me that he would be late since he couldn’t find the airport. It turns out that he went to some airport base for the military, and then eventually found his way. We had to do some errands for his mom in the outskirts so we did so and then went home. I slept, for obvious reasons, and the vacation began. 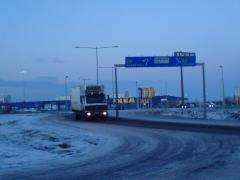 The very next day we decided to do some shopping in Haparanda, which is on the Finnish border. It’s a tiny town with an IKEA, so we would indulge ourselves there and hope that we didn’t die of too much Finnish. In the photo above you can see as we crossed the highway with the sign going to Sundsväll, which is 5-7 hours by car to the south, and in a more ‘habitable’ environment. Notice also the snow, as I got my Christmas wish of being in a white cold place! The IKEA can be seen in the distance too. So we shopped, and found some cool stuff and had a bundle of laughs, and then went for food and saw the litle shops and such were I bought him his present. 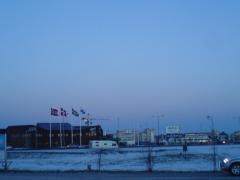 Above is the photo the shows Finland. The white building is in Finland and all the other buildings around were made for passport controls or such before the Schengen agreement was put into place. Wonderful how the borders of Europe have somehow dissapeared in the last 15 years. Will it be good, one will see, but for me it’s freaking awesome. The best part about the Haparanda trip was the fact our bus tickets were bought as children. We both clearly said Tur & Retur till Haparanda, and they charged us children fair so it was only 69:- (dirt cheap as you can probably guess). Go team awesome, also known as 20-something-year-olds who look like 15!!