Yesterday was quite a busy day for me around the region. Early in the morning I decided that I wanted to go and visit some Christmas markets of the region so a bunch of us jumped on train with a group pass to see each of the cities.

The streets of Colmar were first, and they were the bussiest of all the towns we went to. Most of the same vendors as Strasbourg were there, so it wasn’t such a big surprise, but it’s so weird to walk around during Christmas without snow! I bought some Choucrout, which is Alscascian for Sour-crout and sausage which was really good, but quite expensive at a wonderful 5.

This is still in Colmar, and is referred to as “Little Venice” because it was modeled after Venice (the city in Italy). The only difference between the two would be the fact that the water here is disgusting, but otherwise it’s really nice. Colmar is filled with lots of German people, and I hardly heard any French at all which is odd, but not surprising.

Next on tap is Séléstat, which is a tiny little town founded in 1521. It’s the smallest of the markets we went to, but it was also the weirdest. This picture is pretty random since there isn’t anything in the city to see, and the market was filled with odd booths like with Buddahs? What’s up with that?

There are some of the booths that we saw, which weren’t exciting but never the less the city for some reason makes me think of the word “skanky” when I say it. Hence the name “Skanky Séléstat” which I can’t explain really, just the gut feeing I had on the train ride. When can we really explain gut feelings? It’s a gut feeling for a reason I reckon. 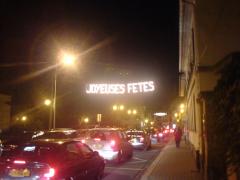 Obernai was the next stop, and it was by far the prettiest and most amazing. It could have been that it was at night (or evening) but frankly there was just this nice small town feeling that made me feel warm fuzzies. We saw sheep, and nuts, and lights, and people, and rides, and chocholate, and crêpes, and everything! Go team Marché de Noël!

We apparently got caught up in lights, or I was forced to take a picture. Why is it that I’m always the only one with batteries for my camera/phone? Sigh!

So what does Strasbourg look like in the train station? This is how we look like when running down the hallway. I was in a rush because I had to get the tram back to Gallia because I was already 30 minutes late for a dinner party since the damned trains from Bâle were all running late. So I got home and called the wrong mobile phone and got confused. I eventually got a hold of Jeweles, who was hosting the party for our class at the institut. Everyone was there and after going to the most sketchy part of Strasbourg all by myself for 2 hours and being lost and everything I called him and I walked to the other side of the city all by myself. It turns out he lives in Schlitschiem which is a suburb, so I walked there, and then he picked me up because I was scared and lost (even though I had a map). Funny how things happen. The night was nice and everything, and I was most excited about going out since I wanted to go dancing afterwards.

This is to take picture to prove I was lost, so I took the sign and wonderd later how I could be so blonde as to go to the wrong city? Oh well, it’s official; I’m born blonde! Revel in my blondness or ditzyness that I enherited!

This is Christina and Jeweles, two Americans in my grammar class. The picture was taken on Friday as we were listening to reports on TV about immigration in France. Can you notice how bored they were from the picture? She’s from Texas, and he’s from California; so they are cool and funny. The rest of our class are Asians, and they can hardly speak French, so we struggle!

I came home and then got ready to go out with Matt, Ginette, and some other of the girls. How will things have turned out? Well to make a long story short, Matt was too tired for cylcing all day, so after I gave him négavibes, he said he wasn’t coming and I got upset, so I decided not to go out either, despite the fact that I had been wanting to go dancing all week! Oh well, apparently he promised we would go out during the week, but will this hold true? Who knows, all I know is that Ginette, Zoë, and Becky were all hammered last night and apparently feel like crap today! Sucks to be them!