A happier note from last time, as I went over to Ginette’s room to see how things were and to see if she had a pair of scissors (of which she didn’t), and then wandered down one door to find Zahra’s room. She’s one of the British people that are here, although I think she’s Irish, and we found that there were about 10 people in her room watching Shrek II, so we joined and then talked a bit. I think I am remembering their names finally, which is a nice chage from not knowing anyone! Anyways, I then went to bed after putting on some face creame, and it wasn’t so good afterall and I smelled like sulfur.

Waking up at 7.00 for 8.30 classes is useless. So I waited out in the rain for awhile and met the other people that were here from the group. I totally forgot that we had dinner tonight at the Lycée, but never-the-less finding out that our test was pushed back until 14.00 was a pain in the ass. So Dr. Lee and a few of us with names towards the end of the alphabet went to the bank (who’s computers were down, and therefore useless) as well as the Agora to make reseverations to meet with someone regarding out carte de séjour. That was a pain in the ass, but I was super excited today to finally have a meal that was under 5; 1,95 to be exact! Thank God for C.R.O.U.S. cards which will now allow me to stay within budget!

The test was a pain in the ass because of course I didn’t know what the hell to write, and sitting in an Ampéthéâtre isn’t the easiest thing to do with a CD recording that ecoed like hell. Oh well, I did my best with what I had and hopefully I will get placed in the upper-levels, or at least the intermediate one. The building that I will be in is really nice and clean, but now I want to eat some and take a nap, but the stupid plumber people are outside making a shitload of noise.. BAH!

After taking the test I went home for a 30 minute nap, before we had to go to the Lycée Jean Sturm to meet the headmaster and get some tour and then have dinner. We met there, and Dr. Lee was late (as always) and we met up with some friends the others made today with some guy from North Carolina who awkwardly stood with us while Dr. Lee did his little spheil and then he went away. We walked over to the Lycée across the street and then met the principal which seemed really weird at first, but it turned out to be a lovely evening. We met in the little area for children who don’t go out for breaks, and with ‘les hommes d’animation’ who look after those who don’t leave. We talked about ourselves a bit, and then he told us many things about the educational system and random things about Alcase. It seems that there are a lot more things i in the region, and a lot of culural things here than I thought. Their own language, their own dialects, their own styles of wine and cheese. It’s all so different and interesting that it’s hard to pass up. 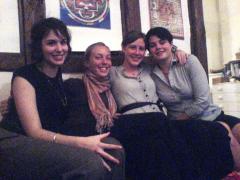 So about this dinner thing. It’s about 5 courses, a lot of food spread out over a lot of time, and a lot of freaking wine. I had about 6 glasses of different wines, but that wasn’t by choice, it was sort of something that just happend; he kept serving me. He probably figured that because I was the only male in the room, that I could handle it, but I’m a lightweight and I struggle on a daily basis. The food was fantastic, and apparently was all prepared by headmaster Michel Jermann, in his kitchen. After showing us the lycée, his apartment is just upstairs and it’s huge. He lives with his son, Timothy, who was very shy with us anglophones, but showed us many magic tricks in the evening. For someone that’s only 15 years old, he’s pretty deep voiced and already has a lot of facial hair. That makes me feel very self concious about myself, but I’m well over that.

Dinner was chit-chatting about random things, and took a few hours, and really was a lot more pleasant than I thought it would be. I imagined that it would be this thing that is so strained, but it was quite natural (apart from the drinking). We were accompanied earlier in the evening by another Michel, and Olivier who are people at the university, and while we were touring we actually met a wonderfully cute woman from Texas who is at the English department there. She was delighted to make our acquaintance and was a bit over the top, but cute none the less! We even were invited by all the staff and people there to come back and get introduced to some students. All we have to do is e-mail the school at some point, and then they can set something up so that we can come talk with the students. It would be very helpful for conversation, and he realises that for some of us it’s quite a struggle with oral expression.

We got to see a movie about the Christmas performances put on at the church, and as well as a bunch of foods and wines that we got to taste. We even got to hear a bit of Alcascian (local dialect) which is quite frankly a mix between German and French!! I’ve decided that it was quite nice, and I am seriously considering going back at some point in order to improve my status as a non-francophone (especially considering the tests that we took today).